The American Health Care Association and National Center for Assisted Living (AHCA/NCAL) penned a letter to CMS administrator Seema Verma in response to a tweet she published earlier in August. The tweet addressed the three-day rule, stating that a SNF resident must first spend three days as a hospital inpatient to be eligible for Medicare coverage, with Verma going on to call out that regulation. 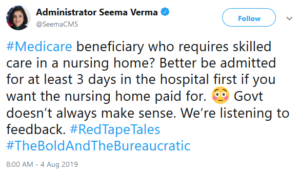 The letter from AHCA asserts that CMS has the authority to define “inpatient care.” AHCA cites a 2008 decision of the Second Circuit Court of Appeals that determined the word “inpatient” has not been adequately defined when it comes to the three-day rule, and can be revised. The court states, “[W]e note that the Medicare statute does not unambiguously require the construction we have adopted. If CMS were to promulgate a different definition of inpatient in the exercise of its authority to make rules carrying the force of law, that definition would be eligible for Chevron deference notwithstanding our holding today.” Chevron deference is the principle administrative law requiring courts to defer to interpretation of statutes made by the government agencies enforcing them.

AHCA urges CMS to define “inpatient” care as any medically necessary hospital stay, including observation stays. By redefining “inpatient,” more residents will be eligible for SNF Medicare coverage after a hospital stay.